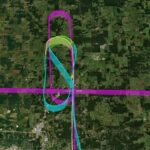 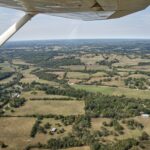 We had excellent weather for the Missouri Pilots Association (MPA) Poker Run on Saturday. It was a good excuse to fly, and I had never had cause to land in Mountain Grove. Cabool usually participates, but they have their runway closed for improvements, so it was not an option.

We wound up skipping Thayer because nobody had that great of a hand going, and one more stop wasn’t going to make a difference. The two legs to Thayer and back would be two of the longest of the day, and we were restricted on how much fuel we could carry and stay under max gross weight.

This was our first leg, and a quick 20 mile flight.

Another quick hop, but a little bit busier. We followed another plane over, and another was coming from the West as we were on final. There was a pretty swift crosswind, and some wind shere that made the landing a little more challenging than most.

As we rolled out on final at Mansfield another airplane taxied out onto the runway to back taxi, so we went around. No big deal there. The cross wind was not felt much as the trees near the runway kept them from being much of a factor.

We were the only airplane at Ava, having missed most everyone else. We did stop and dip stick our fuel tanks, with over an hour and a half of fuel remaining, we headed onto West Plains.

We stopped to get another hour and a half of fuel in West Plains, this kept us under our max weight, but gave us even more of a safety margin on fuel.

Mountain View was the last stop, and the gathering point for all of the runners. We had a great time visiting, and the fried fish was fantastic.

Sweet sunrise over the savannah

Keep your chin up

Hordes of herds, or multitude in migration?

Ready for a show #snugharbor #neworleans

Colors are better than last time.

Sweet sunrise over the savannah

Keep your chin up

Hordes of herds, or multitude in migration?

Of all the creatures I encountered in Kenya, there

The wildebeest follow the rain, and that means tre

I shoot everything - nothing is safe from my camera.
The photos below are a result of the flagrant misuse of my camera.
My art: @erica_arts_animals

*Swipe* for one last stack of photos from Crystal

Beaver Dam at Beaver Lake, from the air. Wow, thos

"I am the vine; you are the branches. Those that r

Here are several more shots I took when we visited

Beauty is around every corner at Crystal Bridges -