This trip was a bit of an exercise in aeronautical decision making. I am not going to claim I made all the right decisions, but I can at least share the situation, the decisions I made, and the results I got.

The plan was to hop up for a meeting at our office, which is right in the air park attached to Spirit of St. Louis airport. The forecast was for good VFR most of the day at home and in St. Louis. The one exception was that Spirit was calling for a period of low visibility from 6am-8am due to mist. There was a warm front in the area, moving East and St. Louis was right on the Western edge of it, so that humid air was going to be moving out of the area. The discussion for the forecast said that they had low confidence in the mist forecast for St. Louis, but were including it anyway.

My meetings in St. Louis didn’t have a hard agenda or start time, so I had some flexibility as to when I would arrive.

I got up early that morning and immediately started looking at the weather. Ahead of the forecast, at 4 am, Spirit was low IFR. Washington and St. Charles (all airports near the Missouri river) had similar conditions. Other area airports including Lambert, Jeff City, Columbia, and Rolla showed good VFR. My initial response was that I would probably make the drive, but re-assess along the way. I was not in any rush, and I knew the longer I waited, the more likely that fog would lift and allow me to get in…. safely.

I got to the airport at about 5:30 am and took my time doing preflight. At our airport, there was a little of that low morning fog near the creak. When I arrived it was hugging the grass. By the time I had done preflight, fueled the airplane, and used the restroom that fog had lifted about 20 feet. Listening to the ASOS in St. Louis showed that visibility and vertical visibility were improving. The conditions had improved from low IFR to marginal VFR while I was still on the ground.

Since I had some timing flexibility, I decided I would go ahead and take off, knowing that I had good VFR weather close to my destination, and that I could easily land there if conditions at Spirit did not continue to improve en-route.

At about the time I had decided, my friend John B arrived at the airport. Knowing that two heads are better than one, I asked John to check my decision making. After looking over the weather, and listening to my plan, John didn’t have any objections, so I loaded up to head out.

The flight was smooth. There was virtually no wind down low, and once up at my cruising altitude, I had a very slight tail wind pushing me along. Shortly after I passed Houston, I checked in with Center and got flight following. My chosen route took me right over the top of two of my alternate airports at Cuba and Sullivan. Although there were low lying areas with fog nearby, both airports were good VFR. Rolla was still reporting good conditions, and the last ADS-B update for Spirit showed it was still MVFR.

Just after switching to St. Louis approach, I asked if Spirit was accepting VFR traffic, and the controller replied that one had just gone in and that it the conditions were mist, with clear skies above. Rounding the bend of the river approaching the airport, it was easily visible, with just that heavy humid air obscuring visibility, not a fog, like I feared would completely obscure parts of the approach.

Pattern and landing were normal, with the only issue being a long taxi to the ramp since the main runway is closed for construction.

For the return flight, the airplane had been reserved for 6, but the reservation was canceled, so I didn’t have any schedule pressure to get back by a specific time. The only concern was that the winds were 14 gusting to 22, mostly down the runway. With the main runway down, I had to hold on the ramp for other aircraft, then spent a while waiting at the threshold for 26R.

The winds were right on the nose making the return trip pretty bumpy, and struggling to get 80 knots ground speed. It made the return much slower, but still beet driving!

Spirit of St. Louis has their main runway shut down for maintenance, which meant a bit of a traffic jam getting to the other runway, and some time waiting on other aircraft. It took me 15 minutes to get from the ramp to the runway! 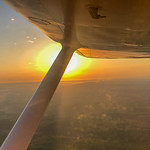 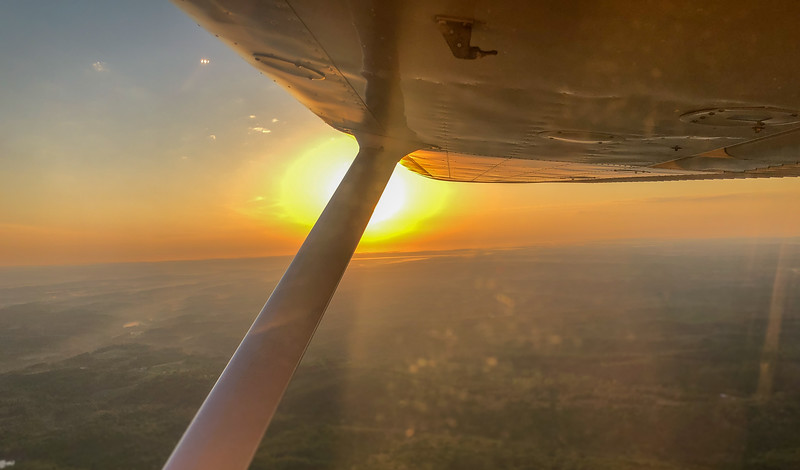 Today was our first day to head out into the Sahara.  Before heading out, I needed to take my first lesson in […]

Erica and I flew down to Gaston’s to see one of my co-workers and his family, and have brunch. The air was […] 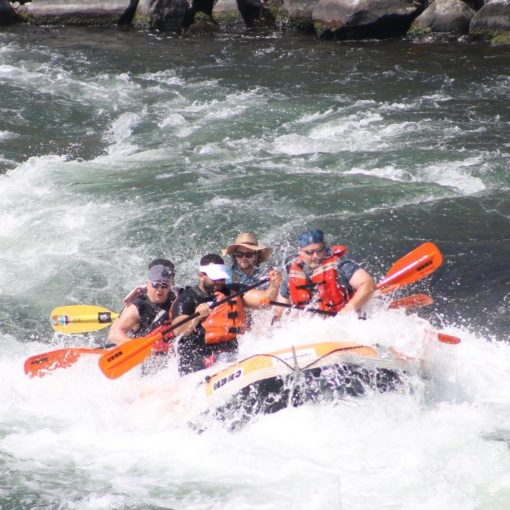