This is going to be more “Much Ado About Nothing” than two different tails of a flight plan for many of you, but I wanted to share some of my thought process on flight planning.

I rarely go direct. Sure, for short hops, I will go direct, but I like to look at several factors when I am cross country planning. One of the factors I look at is available airports and emergency options. If one route puts me over rough terrain, with few nearby airports, while another route provides a selection of airports to divert for an emergency, without adding a lot of time. I am going to choose the route with options.

My example is not a long flight, just a little over an hour, but it illustrates the point. Going from 1H5 (my home airport) to Spirit of St. Louis (KSUS) is about 120nm flight that takes you over some of the more sparsely populated (as far as roads, airports, etc.) and hilly areas in Missouri. In the event of an in-flight emergency, there would be very few options to get the airplane down safely. Airports are out of glide range for a large portion of the flight, and the area is heavily wooded, making finding a suitable off-field landing site much more difficult.

By shifting my planning a little bit, including a navaid and a couple of intersections, the safety factor changes considerably. All along the route there are towns, highways, airports, and a couple of the airports have weather reporting. There is no point where I am more than 15 miles from an alternate airport.

So, what does it cost in terms of time/distance/fuel? For this particular flight, which featured a nice little tailwind, my planned route cost me 3 minutes of time, .3 gallons of fuel, and 3 nautical miles. An easy decision.

One thing that strikes me is that when flying with ATC Flight Following or IFR, they seem perplexed that I include the MAP VOR in my flight plan. 3 of the last 4 trips the controller has offered me direct routing to bypass the VOR. I do love that our controller friends are actively looking for ways to help us out.

For a longer flight, it doesn’t pay to micromanage these routing decisions. When the route is longer, I do still look at towns, weather reporting, and other options along my route to maximize safety.

I had a short trip to St. Louis this week.  Early in the week, the weather forecast was crummy for flying, so […] 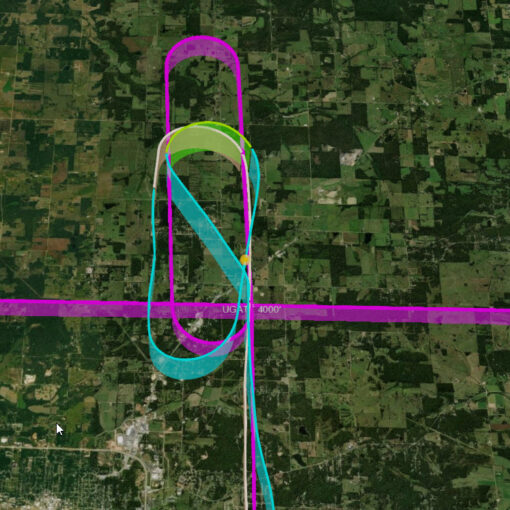