I took the afternoon off to fly the plane over to Ava.  There was a leak on the left tank sump valve that needed addressing and the airplane was due for an oil change.  Our mechanic is really thorough, and I was happy to work with him on performing the oil change and learning the right way to do it, what to look for, and other things to check in performing the maintenance.

The flight over was pleasant with a fun layer of puffy little clouds 500 ft above me.

The flight back was about the same, but the clouds had grown up a bit as the day wore on.  There was some cumulonimbus building about 40 miles East of my destination, but they were no factor as they were slow building and slow moving. Back at Willow, the city was mowing the grass. I did a go-around since one of the mowers was right next to the runway, close enough to touch down that I didn’t think it wise to continue to land. Tom was there and let the mowers know. I don’t think they would have been a factor by the time I came around again, as he had gotten down near the end of the runway. I only needed about 1500 to land and get stopped. 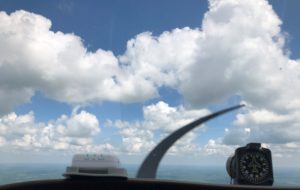 Erica and I took the airplane over to Bentonville to see the Crystal Bridges museum.